Some opponents still try to claim that the Enterprise-D did not turn on a dime at warp in "Encounter at Farpoint"[TNG1], based on the argument that a lack of warp stars is proof of non-warp speed.

In short, they dispute that early TNG sometimes made the error of trying to show warp-driven ships at warp from a stationary camera position (not to mention showing warp flight sans streaking warp stars, most notable in the episode "Lonely Among Us" which occurs almost entirely at warp).   Now, is it scientifically valid to be able to see a ship moving faster than light?  They are quite correct in that the obvious answer is "no".  Nevertheless, such shots are a convention in the Star Trek canon (albeit one they later stopped using in DS9 and VOY), and with the dialog clearly indicating warp flight, it stands.  This stationary position would not have warp stars, even if the ship was at warp. For example, in this very episode, moments before the separation, the Enterprise is running from Q at high warp, but the chase is shown from a stationary camera position as two flybys without "warp stars".

You can see the Q-fireball at warp (the Enterprise has just passed) here (special thanks to Trek5.com for the original much nicer versions of these): 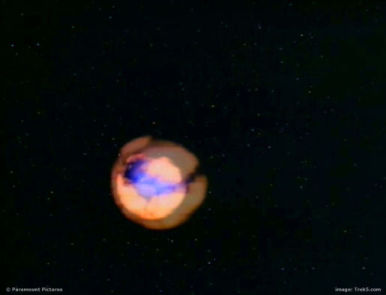 Moments later, we see this view of the same thing, but from the viewscreen of the Enterprise (which is most certainly mobile): 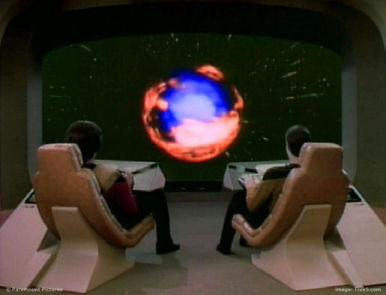 Shortly after the above, the Q-fireball demonstrates that it is far faster than the Enterprise, which has only managed to accelerate to warp 9.5 at that point.   Picard decides to engage in saucer separation, and moves to the battle bridge.   Picard tells Worf: "At the moment of separation, we'll reverse power just enough to get your saucer section out ahead and clear of us." Worf acknowledges. 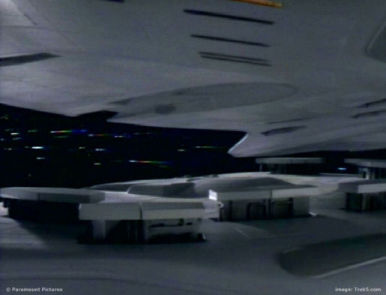 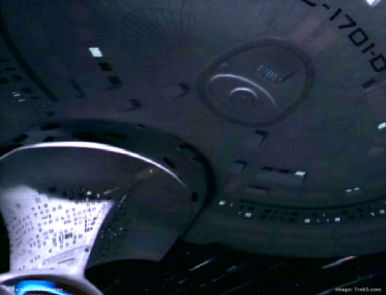 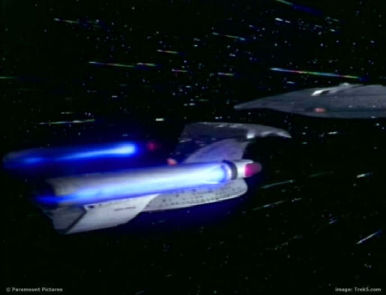 As you see in those last shots, both sections were at warp speed. With the saucer "out ahead and clear", the stardrive section turns to face the Q.

It's worth noting at this point that it is established in "Brothers"[TNG4] that a saucer separation at warp 9.3 will result in the saucer falling out of warp "within two minutes", as per Picard.   Therefore, the saucer section must have been at warp for at least a minute or two after the last shot above.

The next shot of the ship occurs seconds later from a stationary location, and we see the ship turn on a dime and go flying back toward the Q.  Note the saucer in the first image: 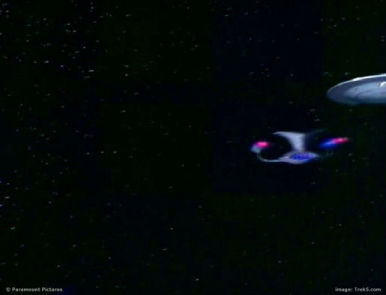 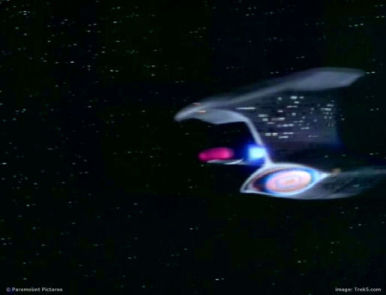 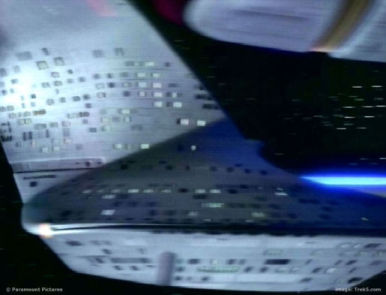 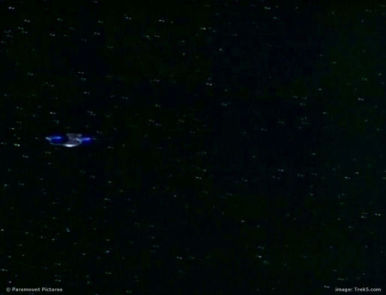 When it does so, there is no "warp flash" of the ship going back into warp. Why? Because it never dropped out of warp to begin with.

There is then a moment's reaction shot of Picard, lasting about three seconds. It should be noted that this is not long enough to allow for the special effect of the ship going into warp that you see at the end of the opening credits. When this reaction shot is over, there is a mobile (with warp stars) shot of the stardrive zipping past at warp. 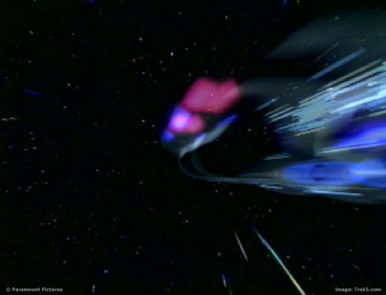 Shortly thereafter, Picard orders the ship to come to a stop. He says "reverse power", then Data acknowledges: "Reverse power, decelerating." The deceleration of the stardrive section from warp speeds takes six seconds... we see the stars slow from "warp stars" to normal impulse-speed "stars" on the bridge, finally looking like this: 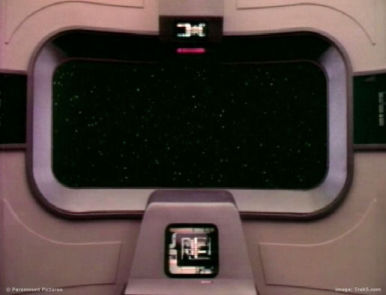 That is but one of many nails in the coffin of the "they dropped out of warp to turn" idea, beyond the simple fact of the way warp was portrayed in early TNG. The fact that the ship took six seconds to drop out of warp with reverse power means that the ship could not have dropped to impulse to make the hard starboard turn. It also means that the saucer section, which could not have reversed warp power and would've required at least a minute to drop out of warp, was still at warp in that shot.

The only other possible explanation would be that there are two minutes of unseen time during which Picard does nothing but trail behind the saucer, slowing down proportionately to its fall from warp (so that the vehicles are never more than a couple of hundred meters distant from one another), while letting Q come ever-closer with an ever-higher closing speed.   That's preposterous.  If he'd really needed to drop out of warp to turn around, it would've been far simpler to reverse engines, which would've let him fall out of warp in a mere six seconds.

But, alas, my opponents insist that Picard must've decided to pull some warp acrobatics just for kicks, instead of trying to ensure the safety of the saucer section.

(The entire TOS lack of streaking stars, not to mention the streaking-light effect through regular-plain-ole'-starfields from the TMP-era films, must absolutely boggle the minds of those who made this objection.)

Some Warsies have tried to claim that the Enterprise was not, in fact, warp-strafed by the Klingons in "Elaan of Troyius"[TOS]. Their reasoning involves the fact that at times, Sulu called out ranges in kilometers, and a starship at lightspeed could not have been at the slow speeds indicated by those ranges.

It is true that the Klingon ship wasn't always at warp, but there is clear evidence that at other times, it was. Take a look at the breakdown of the attack runs on the Enterprise:

First Pass:
Not a warp strafe
The Klingon ship approached at warp six, then apparently slowed down, allowing Sulu to make small incremental range callouts of about 10,000 kilometers per second. The Klingons did not fire, hoping the Enterprise would go to warp and blow herself to bits with the engines rigged.

(Kirk orders Sulu to keep the forward shields to the Klingons.)

Third Pass:
Warp Strafe
The Klingon ship approached at a speed which Spock read as "greater than warp seven". Sulu did not call out ranges this time out. Kirk ordered Sulu to turn hard over as the Klingons approached, saying "he's going for our flank." The external shot showed the ship slowly drifting and turning to port. They were hit, apparently shot in the butt. The ship shakes.

(Possible extra pass here, since Spock says, a few seconds after the 3rd pass, "he passed us again, damage to our number four shield". But, no shaking happens. I can't imagine why Spock would say they'd been passed again, though, if everybody knew that. Another pass at this point would suggest a second warp strafing run, or else some impressive impulse maneuvering.)

Fourth Pass:
Warp Strafe Likely
This attack run was given neither a range nor a speed, but it was clear that the Klingons were gunning for the number four shield, and the last time they were aiming for what Kirk was protecting, they warp strafed. Also, there is no indication that they slowed from the last run. Kirk orders Sulu hard to port, and the Enterprise turns very quickly, but they are still hit. Shields hold.

(Number four shield collapses. Impulse power at 31 percent. (Because of another shake-free strafe?) Kirk tries to stall for time while Scotty and Spock try to get the engines back online.

Fifth Pass:
Not a warp strafe
The Enterprise gets warp maneuvering power back online, Kirk plans to pivot at warp two and fire torpedoes. Sulu calls out the ranges, starting at 100,000 kilometers. Kirk orders Chekov to hold fire until minimum range. The Klingons pass, shooting just as shields are brought to full power. The Enterprise jumps to warp two and pivots (using the drifting-left shot from earlier, but much faster) and fires torpedoes, hitting the forward port areas of the Klingon ship. The Klingons withdraw.

As you can see, there was at least one, almost certainly two, and possibly three or four Klingon warp strafes in this episode. Further, if the Klingons did not accelerate to warp after what I call the 5th pass, then the Enterprise was at warp and warp-strafed them back.

Rabid Warsies such as Wayne Poe also try to claim that the Klingon ship wasn't warp strafing because there was no warp starfield effect. However, this is silly, since TOS was highly inconsistent with its use of starfield motion. If you watch "Elaan of Troyius", you'll see fast, slow, and medium-speed star motions all used in reference to both warp and impulse, because there was no dedicated, consistently-used TOS warp effect.

3.  Photorps routinely miss targets at ranges of just a few kilometers, so the accuracy you claim is impossible!

This claim is simply false. So far as I know off the top of my head, the only examples of torpedo misses are:

"Journey to Babel"[TOS2], in which the Enterprise fires on and repeatedly misses a target which is passing them at ludicrous warp speeds.

Star Trek II: The Wrath of Khan, where the starship Reliant, earlier referred to as having damage to her photon controls, misses the Enterprise by a scant few meters, then makes a wide miss later when her sensors are almost totally obscured by the nebula.

"Hope and Fear"[VOY4], during Voyager's first experience in the slipstream (which hardly constitutes a normal example).

"Way of the Warrior"[DS9-4], where groups of torpedoes "missed" in the exact same directions . . . and we know there were plenty of off-screen targets (as per the torpedo chase shot).

Other misses may occur, and these occurrences may be for various reasons.  However, given the accuracy required for the strafing we know to occur, dismissing strafing because of a miss and the presumption that miss is just due to poor targeting accuracy is unwise.

3a. But we couldn't see any ships in that direction.

Eight Klingon starships were not seen to be hit during the firing scene she reports about. More weapons firings than the ones seen in that scene were not observed. Ergo, more were hit, but were not seen being hit, by the weapons we saw fired. Given the torpedo chase shot (a trailing view from behind a torpedo in-flight), we know there were ships beyond other ships, outside direct visual range.