The Ewok Arrows:  Arrow One

See also the caps of the first arrow on this page, which features a useful frame numbering system used on the page.

With the advent of the DVD versions of the Original Trilogy, a wide variety of new claims have come up regarding the arrow scenes.

The more rational Pro-Wars debaters had long since abandoned the claim that the final frame (#21) showed the arrow, as I had to argue against previously.  The few hold-outs, however, were silenced by the new version.   For a comparison of the quality of the caps, look below: 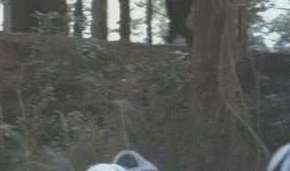 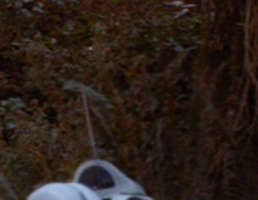 We can even zoom in if we wish: 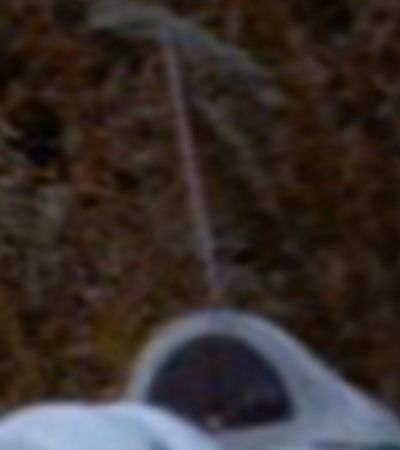 The quality of the DVD version showed that the smudge on the armor was just what I'd said . . . a smudge or chip or some other such discoloration on the armor.  There is no arrow that can be seen "over" or "in front of" the white rim of the backpack, or in the black semi-circular top of the backpack.  Further, this angle lets us see that there's nothing over the white armor closest to the trooper's back.   If the arrow was in front of the backpack, and hence probably in the black bodysuit, then those are the three separate places where we should be able to see it contrasted against armor.  We don't see it in a single one.

As a result, the opposition looked elsewhere for something to bolster their claims.   One of them noticed that the arrow seems to be invisible in certain places in certain frames, as seen below. 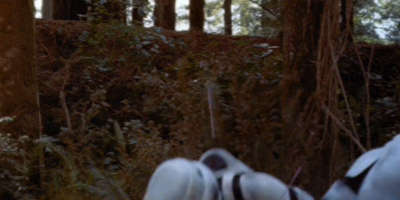 While some attempted to call the entire scene suspicious and unusable, or chalk the whole thing up to a special effects bluescreening error (which would be odd for a practical effect using a physical arrow), or even a film error.  Others kept looking for evidence.  This was a wise move, since the frame above and the similar frames merely show the leaves of the fern-like plant behind the trooper obscuring the bottom of the arrow, much as the top is obscured in other frames.   There's been some argument on that point, too, though . . . after all, if part of the fern could obscure the arrow there, then it would have to mean that the arrow was closer to the fern than the rim of the backpack, and thus that the arrow was in the backpack itself.   Note further that the three separate places still show no arrow, though we can clearly see an arrow in front of the trooper's left arm.

And so the opposition's search for evidence continued.   Of the twenty frames which show the trooper and the arrow, it was found that two appear to show something over the backpack, if you use your imagination a little.

By this point, the situation should be pretty clear.   In the later frames, we are able to see the three separate places where an arrow should be, but isn't.   Those are (1) the white backpack rim, (2) the black semi-circle on top of the backpack, and (3) the near-back white armor area.   Armor apologists attempt to claim that Frame 8 shows an arrow over (2) the black semi-circle, but that it just happens to be invisible over (1) the white backpack rim.  They also attempt to claim that Frame 10 shows the arrow above (1) the white backpack rim, and have gone so far as to claim that it is also visible against (2) the black semi-circle.   Naturally, though, (3) the near-back white armor area is not even visible in the images they cling to.

Let's look further at the two frames they misinterpret.   First, let's look at Frame 8, which they believe shows the arrow over the black semi-circle.  If you look closely, you'll note that the angle of the claimed continuation of the arrow over the black semi-circle doesn't line up properly.   If we zoom in close and draw a line over the arrow and one over the claimed continuation, you can see this clearly:

The arrows of the Ewoks did not appear to have such huge variations from the straight and narrow.   Further, this arrow itself appeared nice and straight on its way in, without any such ~10 degree angles apparent. 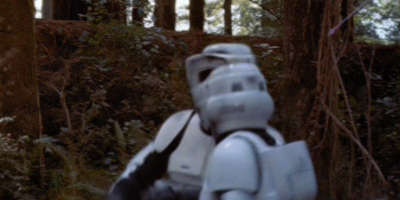 In short, the claimed continuation of the arrow does not line up with the arrow itself.   And, as if that weren't bad enough, just one frame later this claimed continuation isn't even visible.   It doesn't make sense in the scene to assume that the arrow broke given that it nicely swipes the fern as the trooper falls.  Further, the idea of a broken arrow makes absolutely no sense in light of the frames like 21 that show nothing in that region.  If the front of the arrow had fallen off, for instance, the back would have to do the same.   As a result, there's no way for Frame 8 to support the opposition claim.

Below, let's take a zoomed-in look at Frames 9 through 12, so we can look at the opposition's claims about Frame 10: 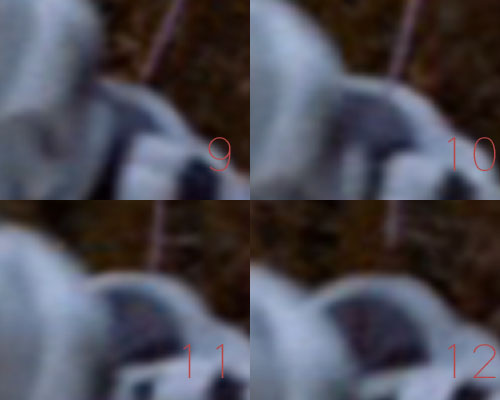 As you can see, Frame 9 shows nothing of value for the opposition, though the divit is visible to the left of the arrow as a darker area.   You can also see that there might be fern in the way of the arrow, given that the arrow doesn't quite reach the white armor.   You can see how Frame 12 once again shows fern in the way, the same brown piece of fern about to be struck by the arrow in Frame 11 due to the trooper's twisting motion.

The smudge or chip from Frame 21 is easily identifiable in Frame 12.   The black linear object on the black part of the backpack is visible, and thus we're able to see that the smudge is in the same relative position.

In any case, though, you can see that there is a darker area which roughly lines up with the arrow in Frame 10.   But, as you can also see, it is not present in the frame before or the frames afterward.  Further, there is nothing over the black semi-circle area in any of the frames.  Last but not least, if you look at the frames in reverse order, it's easy to see that the position of the old armor smudge and the darker area happen to converge.

The armor apologists must be credited for their persistence, but nothing else.   Their belief that the arrow went into the bodysuit is simply unsupported and unsupportable.   In every frame where we should expect to see the arrow constrasted against three separate spots, we do not.   The apologists chalk this up to film error.

Of the remaining frames in which only two of the spots are visible, the armor apologists have two which, they claim, show the arrow above one or another spot.   However, even these claims falter . . . one due to bad angle and ignoring the known details of scout trooper armor, the other because it is nothing more than a convenient conjunction of one frame, a conjunction which doesn't exist before or after that frame, though the elements are still visible.

It is little wonder, then, that the armor apologists attempt to claim film error.   It is the only excuse they have available to try to rationalize away what everyone can clearly see.

Back to Stormtrooper Armor