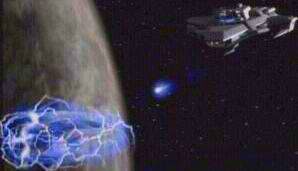 Along with the cannonball torpedo of Star Trek V, another common claim for weak Trek weapons involves referencing the Next Generation episode "The Survivors"[TNG3].

In the episode, a virtually omnipotent being had chosen to live among humans in the 24th Century, even marrying one.  Now Kevin Uxbridge, he and his wife Rishon had moved to an isolated colony, and, unbeknownst to him, his fate was to become the only survivor of its destruction by a race known as the Husnock.   Thousands of colonists, including his wife, perished.  Normally a pacifistic being, the rage overcame him, and he destroyed all of the Husnock, everywhere, with only a thought.

When the Enterprise arrives in response to the Delta Rana colony's initial distress signal and begins snooping around, Uxbridge tries to force them away by producing an image of a Husnock warship which fires on the Enterprise:

A second engagement occurs later in the episode:

Some unscrupulous debaters try to claim that this event shows a maximum shield strength of 400 gigawatts for the Galaxy Class. In other words, anything more than about .95 tons of TNT per second will overload the shields and bring them down. That's less than a photon grenade!   In a more modern sense, if the Enterprise-D were in the lower atmosphere, the US Air Force would need only hit them with 9 or so 500-lb bombs within one second to bring down the shields.  A MOAB bomb would do the job ten times over.   But the claim is still made, despite the fact that an unshielded Constitution Class from a century prior was unconcerned with conventional munitions aboard a 20th Century interceptor . . . it was only the thought of nuclear missiles having the capacity to "do some damage" that was a concern ("Tomorrow is Yesterday"[TOS1]).

This is obviously silly.

First, "particle energy" is a peculiar phrase that can refer to kinetic energy of the particles, particle charge, and other things.  Even in the light of the rest of the episode, obviously the Husnock were not limited to weapons only capable of single-ton-of-TNT output.   After all, the Enterprise-D arrived some three days after the distress call was sent from Delta Rana IV.  The colony world was seen from orbit upon the Enterprise-D's arrival, and all were shocked at the dead, pockmarked surface of the world.  Though it can't be said with absolute certainty that Delta Rana IV started out Earth-like, it certainly didn't start out looking that way. 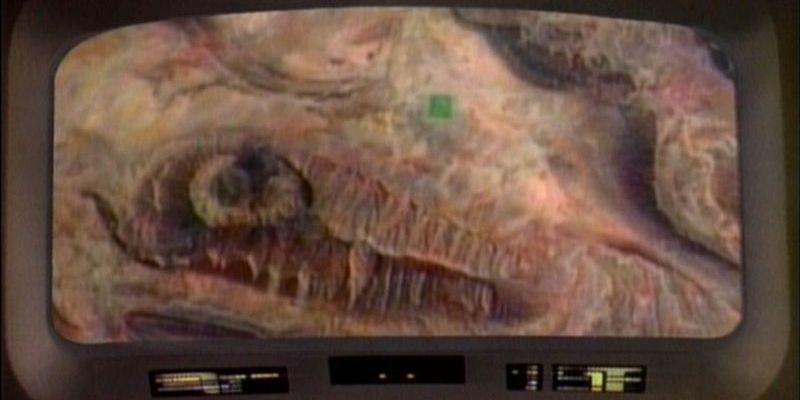 Above, you can see the zoom-in on the one remaining area with life . . . the house and surrounding yard of Kevin Uxbridge.  Earth-like grass, trees, and bushes were a part of it.  Even assuming that only parts of the colony world were Earth-like, the damage to the entire surface still requires that the Husnock be capable of delivering devastating amounts of energy against the surface within a mere three days, and likely less.   This would, note well, be a level of devastation greater than can be produced by the entire nuclear arsenal of the world.   Even if you include Data's comment regarding far more powerful bursts, the Husnock weapons, if limited to, say, the low terawatt range, simply wouldn't be powerful enough to produce that kind of devastation.

And further, we're supposed to believe that 0.095 kiloton (400 gigajoule) weapons are devastating in ship-to-ship combat?  There's no logic in that.  We know from "The Die is Cast"[DSN3] that the Romulans and Cardassians are both capable of similar levels of planetary bombardment, able to burn away the entire crust in a matter of hours.   We also know that Federation photon torpedoes are in the 100 megaton (418,400,000 gigajoule) range, and we know from "Message in a Bottle"[VOY4] and "Equinox"[VOY5/6] that Federation shields don't instantly succumb to Federation torpedoes (following a pattern of rough shield-weapon parity first observed in "The Ultimate Computer"[TOS2]).   Severely weakened shields resisted hundreds of thousands of terajoules (hundreds of millions of gigajoules) in "Relics"[TNG6].  However, for the "Survivors" fallacy to be accurate, the weapons of the major species of the Alpha Quadrant should all be quite capable of simply giggling at the shields as they bowl right through them.  Absurd!

Second, no one else including the Empire fires jacketed streams of antimatter, and the only other time we saw antimatter fired like that was when the Enterprise-D used an antimatter spread to confound Borg sensors in "Best of Both Worlds". Of course, this assumes that the Husnock image was still firing the jacketed streams of antimatter the second time around. Third, Worf spoke of reassembling the shields, a phrase not heard before or since, and certainly not during occasions when shields were overwhelmed by raw firepower . . . in "Tin Man"[TNG3] and "Best of Both Worlds, pt. 2"[TNG4], we see that it takes a long time to repair shields that have been hammered down.  (In other words, the weapon may have demonstrated some sort of peculiar shield-scrambling effect, but this is not certain.  However, it would seem to be the most logical concept.)

(Another thing that's curious is the use of jacketed antimatter in space. Why would you want to do a thing like that? Sure, you're in orbit, but it isn't like there is so much free-floating matter up there that the weapon will fail. Perhaps the jacketing was some sort of electromagnetic containment, with matter interlaced in the jacket so the two would combine upon impact. We simply do not know what the yield of the two combining on the shields would be, though it would probably be rather like a photon torpedo, if less efficient. However, the Husnock weapons were far larger than a torpedo, so unless the jacketing was tremendous, that would have been a huge amount of matter and antimatter.)

Fourth, most weapons that can bring down the shields can produce devastating damage to a ship's hull, as well. That was not the case here. The shields fell (or got scrambled), but a direct hit from the same weapon only produced thermal damage to the hull. No breaches, no casualties. If the 400GW weapons was the same as the 40MW weapon, then it was antimatter hitting the hull! And all that happened was minor thermal effects?  Sure, Starfleet hulls are tough, but still . . . no, whatever this weapon was, it clearly had shield depleting properties.

Of course, over and above all of that is the fifth, and most incontrovertible, proof of the fallacy. This was a weapon fired by an image of a ship, created by a virtually omnipotent being. This being had proven himself capable of fooling sensors in various capacities, from the Enterprise sensors to Beverly's tricorder . . . he'd wiped out an entire civilization with merely a thought.  Since it was the construct of a being of "disguise and false surroundings", one can hardly bank on the reality of the event. A dog's flatulence could bring down shields, so long as there was an omnipotent being wishing it to be so.

A few thoughts, with assumptions noted:

Also, it is worth noting that the Husnock were probably a technologically unsophisticated race. Uxbridge states that he killed their entire race, and numbers them at 50 billion. Well, we're not too far off from ten billion, and a few easy-to-colonize worlds plus our "reproductive proclivity" would allow for rapid gains in population counts. Of course, we don't know what the Husnock were like in that area . . . they might have reproduced more quickly or more slowly.

The main argument for a lack of technological sophistication is this: they fired antimatter at targets. When you're shooting a shielded target, antimatter isn't going to do any better than matter. Assuming Uxbridge had his image of the Husnock realistically constructed during the 40MW first engagement, this suggests that the Husnock were used to unshielded targets. In other words, they were used to shooting at either undefended planets and colonies, or unshielded starships.

Remember, it was only after Picard made it clear he wasn't leaving that Uxbridge had the Husnock represented as guys wielding big guns, with weapons capable of more powerful bursts. Sure, their ships were large and scary-looking, but so is a Star Destroyer . . .  bigger obviously isn't always better.

Thanks to G. Kennedy for the Husnock pictures from the episode.