During the destruction of Alderaan, we are able to observe a circular front.  It begins in the area of the superlaser target zone, and encircles the globe.  Below is a view of this band of brightness, starting at the fourth frame.  Note how it "backlights" the dark debris cloud on the left. 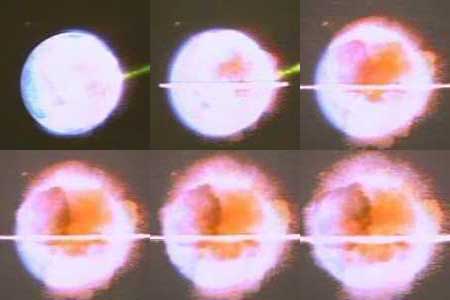 (Some have expressed curiosity in regards to the term "band".  My use is akin to meteorologists' use of "band", such as a "band of thunderstorms".)

A contrast-enhanced vidcap shows the band racing around the globe more clearly:

The behavior of this band is quite curious.  It does not behave like a simple shockwave, given that the effect does not appear to lessen as it expands.  This suggests that the front is somehow maintaining or increasing in energy as it travels.  Further, by necessity due to its increasing size, the entire band must be increasing in energy, as opposed to the dissipation one would expect from an expanding shockwave.   Finally, Mike Wong was able to measure the band's velocity, helping to establish that it travels at a significant fraction of lightspeed.

Various other peculiar behaviors are demonstrated in reference to the band, as observed in subsections B-D.

B.  The Surface Behavior

The surface appears to remain more or less unaffected before the band arrives.  Note in the image below the arrows pointing to intact surface areas: 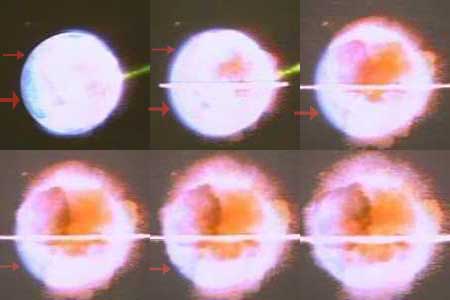 Also note that after band passage, you can still see the curvature of the planet, as seen in the animation to the left.  In the following sequence of images from which the animation was built, the areas are easy to see.   To the right of the image, for comparison, I have placed images of the same area from later frames which occur after the secondary blast, frames which show no such curvature present at all:

It does not seem to be mere atmospheric burn-off, since there seems to be glowing debris launched into orbit all around.  It also does not appear to be the surface of Alderaan, since although it looks like it is in the exact same place, it is in fact standing a bit off from the prior location of the surface.  Further, the curvature is more consistent with a larger sphere than that of Alderaan.  Finally, there seems to be a split in the center of the curve.  All of these effects can be seen in the overlay view below:

Just what the curvature is composed of seems unclear.  It does not seem to expand along with the debris and whatnot all around it (which is why it was noticable in the first place).  It doesn't make sense to conclude that it is ejecta of the same type observed all over the rest of the world, since that was ejected with far more velocity and randomness of shape.  I would posit that it is indeed what remains of the surface (or sub-surface) of Alderaan, outwardly displaced.  This new visible surface could be in the form of upper mantle material heaved upward.

In any case, this expansion would seem to coincide only with the passage of the band, since the surface seems to be relatively intact until that point, as noted above.

D.  Relation to the Superlaser

The superlaser beam ceased within a frame or two of the band's appearance, meaning there was no more energy input from the Death Star to power the band's necessary continuing increase in energy, or the related observed upheaval.  This is a most peculiar peculiarity, to say the least.  As Mike Wong of Stardestroyer.net has explained to his board denizens in reference to Earth's destruction in "Twilight"[ENT3]:

"Face it; the only solution is a goofy Scorpion-style chain reaction. An object which has been given thousands of times more energy than is necessary to vapourize it will not mysteriously hold together and appear mostly solid until well after the beam stops firing."

In any case, the band wraps around the globe and has basically disappeared from view approximately 16 frames after superlaser impact.  It would've been on the horizon earlier, of course, given its size.  This would suggest that the band should collapse on itself on the other side of the planet about 30 frames after superlaser impact, give or take.

During the superlaser strike on Alderaan, we observe the formation of a band of brightness around the impact site.  The bright band that encircles the globe increases in energy as it travels, and concurrent to its passage there is a violent expansion of the uppermost remaining layers of the planet (and presumably at least some layers below), suggesting a correlation between the two events.  The superlaser strike ceases about two frames into the band's travels.   Thus, barring some sort of peculiar delayed reaction, the superlaser is not the source of the band's increasing energy.

A.  The Rings of Alderaan

Two rings appear during Alderaan's destruction.  The first begins at the fifth (and final) frame of the superlaser's impact:

The above ring appears some 1500 kilometers from the surface of the planet, and by the next frame has already leapt at least three times further, suggesting that the ring emerged from the planet sometime between the fourth and fifth frame.  The ring, estimated to be expanding at about 1/3c by Mike Wong, slows its expansion over the next frames.   The ring is joined by another which we first see exactly one second after the first appears:

This second, thicker ring overtakes and merges with the first.  This ring seems to be offset from the centerpoint of the first ring.  You can see how the yellow centerline is ever so slightly to the left of planet center in the overlay below: 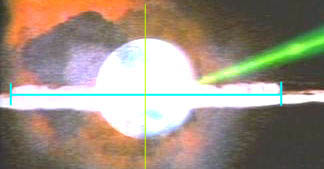 It is not clear if the rings are on the same plane as Alderaan's equator, though that is possible assuming Alderaan to be Earth-like (it would be summer in the northern (or upper) hemisphere).

The Liberty's destruction also demonstrates a peculiar planar explosion effect.  As mentioned previously, the original explosion was slowly consuming the ship.   As seen below, there is a sudden and incredible enhancement of this over the space of just one frame:

The above does not correspond to any non-superlaser-related vehicle destruction events.  For example, an Imperial Star Destroyer is seen to explode during RoTJ.  A Rebel ship fires on (but misses) the vessel, and the ISD then explodes, presumably due to prior damage to its reactor.  There was no sudden violent blast as occurs above.  As occurred when the Liberty was first hit, this is just a slow explosion event.  This one, however, consumes the vessel in its entirety.   The images below are each ten frames apart:

The destruction of the Trade Federation battleship in TPM, explicitly referred to as being caused by core damage, also doesn't show any sort of planar effect.

As Curtis Saxton somewhat strangely puts it, this ship "explodes from the inside outwards".  In fact, that is not the case at all.  The three images below are each one frame apart:

and a few frames later:

As you can see, the above explosion is most peculiar.  In addition to what looks like a yellow fireball, there is also a strange pinkish-orange effect which emerges quite quickly from the ship when it is hit.  The composition of this orange cloud is uncertain.  The first image above shows the cloud surrounding the ship's outline, implying a roughly spherical shape at first.  The later frames, however, show the cloud taking on a planar expansion.   How is that we know it is planar?  Observe:

First, note that the translucence of the orange cloud shows very little change between the center of the cloud and the outer boundary of it (from our perspective).  A spherical cloud of, for example, particulate matter would be increasingly harder to see through the closer toward center you looked, since there would be more material present to obscure your vision.  At first it might appear that such a thing is discernible in the third of the above images, but in fact it is two separate "layers" or "boundaries" of the cloud.  The first dissipates as it moves off-screen at high speed, and the last image above shows the second, which seems to slow before disappearing.  You can quite easily see the flatness of the orange cloud in the final image.

Another way to observe the planar nature of the effect is to look at the nearby vessels.  There are three Rebel transport ships visible in the shot . . . the two most readily visible are one below and to the right of the Falcon and one above and to the right of the Death Star superlaser.  The vessel which is further away (i.e. the one appearing near the Death Star) is completely obscured, whereas the closer vessel is not obscured at all.  The two vessels are seen at different angles (not to mention the Falcon blocking part of the view of one of them most of the time), making estimation of distance difficult.  However, even via eyeball estimation, the two ships cannot be a huge distance from one another, and we know from TESB and other RoTJ scenes that these are not especially large vessels.  Thus, by extension, neither is the Rebel Wingless.  So, this also doesn't allow for the conclusion of a spherical explosion.

(The 'yellow fireball' is discussed further in Section V.)

D.  The Secondary Blast of Alderaan

This secondary explosion originates from somewhere toward the left of the center of Alderaan, and the explosion expands violently leftward.  This can most easily be seen in the overlaid image below of Alderaan before and during destruction:

It is interesting to note that the point of origin of the secondary blast and the point in time at which it appears are both roughly consistent with the 'collapse' of the band on the other side of the planet that I mentioned in Section II.D.

Back to the Superlaser Effect Index

Back to the Death Star Research Project Index