(a.k.a. New Revelations about the Scimitar Shields from the Nemesis DVD)

So there I am, enjoying the new Nemesis DVD, getting some nice screenshots, et cetera.   Then, I decided to take a look at Geordi's shield screen, to see if I could see any better details.

According to that screen, the Scimitar never lost her shields.  Ever.  Not when the ramming occurred.  Not even when people were beaming through them left and right.  Never ever.  Probably not after she blew up either . . . or perhaps that's just my general annoyance talking.

Let's take it from the top: 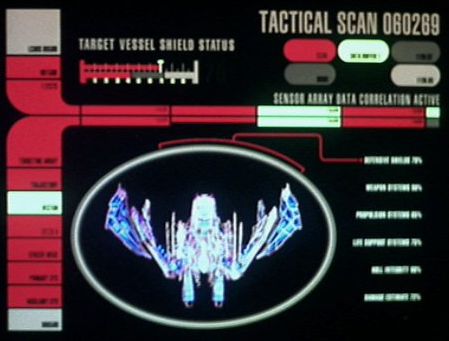 Above, you see a pretty nice view of Geordi's screen.   This is what he's looking at when he reports that the Scimitar still has 70% shields left (and that therefore it would be useless to employ what little phaser power they have left).

As you can see, there's a little "slider scale" line graph on the upper left, with the target vessel shield status displayed.  This also has a digital readout to the right, which you'll see momentarily.  Along the right-hand side of the image, you can see various words, with little percentage indicators off to the right.  Those words are hard to read, and the numbers are virtually impossible.  Here's how I read the words:

(and something else, no clue what)

Obviously, the line which extends from the oval around the Scimitar points to the "defensive shields" indicator.  Below, we get a better view of this, along with what may or may not be a representation of the "primary and secondary shields" that Worf spoke of when they first met the Scimitar.   You can also see the digital readout of the shield strength.  The image below occurs just a handful of frames after the image above, as Geordi is still making his report. 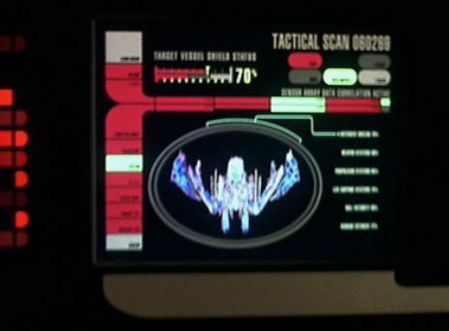 Above, we see Geordi looking reserved as Captain Picard orders self-destruct.   This, of course, occurs after the ramming, and after the Scimitar has pulled away from the Enterprise.   Take a peek at that screen to the right of Geordi.   Can't see it all that well?   Here's a zoom-in from three frames later: 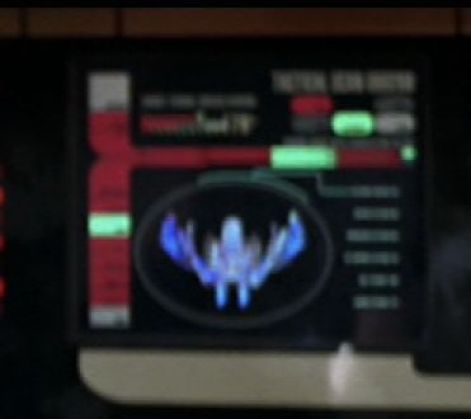 Yep, there it is.   That "Target Vessel Shield Status" thingy is still reading 70%, both digitally and via the little line graph.   And, the line from the oval is still pointing in the same place.

In other words, this screen appears to indicate that the shields were not only up, but were perfectly happy with the whole ramming thing.

If that's not enough to boggle your mind, try this on for size:

Geordi briefly debates Picard's plan to beam over.  (No mention of shields.)

"Well, that's it.  Transporters are down."

In case you didn't notice, each of those pictures shows the tactical scan behind Geordi.  On each of those, the screen shows that the shields of the Scimitar are at 70%.   That's before, during, and after transport.    (Little wonder the system blew . . . it had just performed a miracle.)

Even better, that would have to mean that Data's flight over to the Scimitar, and his use of that itty-bitty "Emergency Transport Unit", all occurred right through the Scimitar's shields.

So, now comes the fun part.  Clearly, the whole situation is just screwy.  If we go by this screen, the Scimitar had shields that were totally unfazed by beaming in, beaming out, flying androids, and ramming.   Though we haven't seen the "Flying Android Shield Attack" before (though that would make an interesting name for a band), we certainly have a situation where there are no less than three complete and total tech contradictions.   First, beaming into a shielded ship is always a big no-no . . . they had to find a way to do it in Insurrection, and actually spent time and FX explaining how they were doing it.    Next, beaming out through a shield is also a big no-no . . . several episodes have involved the issue of dropping shields for transport, including ""Dagger of the Mind"[TOS1] and "A Matter of Honor"[TNG2].   And finally, as I made a whole page to point out, you can't just ram your way through shields . . . you'd at least see some sort of sparklies involved.   In Nemesis, we see nothing.

It gets even worse if you add the plot into it:

1.  The ship exhausted its complement of photon torpedoes against a ship that had Special Beam-Through Shielding.   That means that they had a long time to beam a torpedo into Shinzon's lap, even after the cloak fell (at which point we might expect transporter aiming to be easier).  Such a maneuver was observed in "Dark Frontier"[VOY5] . . . minus the lap . . . and the cloak.  But the lap, mostly.

2.  If the shields were open to ramming, why not just shut off the torpedo shielding, or use them like mines (when there is no shielding involved)?   The latter was observed in "Year of Hell"[VOY4].

3.  The Enterprise-E shields had to be punched through before the Remans could board the ship.   Where was Shinzon saying "hey, their shields are pretty cool . . . um, guys, we need to go get on that"?

Oh, but wait, let's also not forget that the shield indicator was doing this blinky thing the whole time.   But, as we now know, that's a shield indicator on the upper left, and it doesn't change at all, and certainly not in time with the blinking.

So, what can be done about this fiasco?

Well, as I see it, we have the following options:

1.  Accept that the shields were up the whole frickin' time.

No.  I'm really quite sorry, but that just makes no damn sense . . . it makes the whole plot stupid, and contradicts everything we know about shields.   Even if we just assume that the Scimitar had special one-off uber-wonky shielding, it still doesn't make any sense.

2.   Ignore the screen, because it sucks.

This is very tempting.  However, it is what Geordi looked at to report the 70% shielding, so we can't just throw the whole thing away.  So:

2a.   Ignore the screen after the ramming.  Find a cause.

This works pretty well.   We could say it was faulty.  Why would it be that way, in the movie?  Well, you can insert your own excuse here . . . my personal preference would be that the appropriate sensors were now a hood ornament on one of the Scorpions that got knocked around during the ramming.   After all, the ramming damaged the self-destruct, of all things . . . why not Geordi's tactical sensors, too?

That's the only option I can think of that makes any sense.  It isn't perfect, to be sure, but it keeps the ridiculousness to a minimum.

Hey, I think my head's starting to feel better already.

Entertainingly enough, the SD.Net crowd is claiming, and I quote, "VICTORY OVER DARKSTAR", evidently because the oval thingy on the screen was indeed a shield indicator, and I'd previously argued the opposite due to its non-conformal shape and blinking behavior.  What they fail to realize is that this only harms their "kiloton torpedo" argument.  They're also claiming that I'm suggesting the ramming overwhelmed the Scimitar's shields, which this page absolutely does not suggest.  The Nemesis Fallacy is still a fallacy.