Bernd Schneider, of Ex Astris Scientia, has tried communicating with Wong in the past, with the results one might expect. This, plus his observations, have led to a rather more creative take on Wong's site:

Once upon a time, there was a boy called Mike. Mike had a wonderful family and a bachelor degree from a renowned university. Mike's life could have been perfect - if there had not been one curse on it: he did not like apples and he shuddered at the mere idea that so many others could possibly find them appetizing. Not that he would have detested apples, but he saw them as mere nourishment compared to his beloved oranges. Mike frequently tried to talk people into agreeing with him, but he usually got to hear something like "Well, but I like apples better. You have to accept that they are just more popular, and better for your health anyway". No wonder that Mike grew tired of the repeated unproven assertions and the stupidity of these people who he called "appies".

In an attempt to prove that oranges are more delicious indeed, he argued that oranges must taste better, as he had observed that apples used to have strongly varying colors and became brownish after a few days, while oranges remained perfectly, uh, orange. Also, oranges were more expensive, so they must be of a higher quality as this predominantly determined the price according to the well-defined laws of the market. Being a serious scientist, Mike did not take into account what people were telling him about their personal taste. Most of them, in his view, were just not qualified to make a statement about taste, because they were lacking a sensitive tongue like he had one. But he did consider the shameless advertisements for apples which pathetically called them "Golden Delicious" although they were just ordinary apples - and, as he had proven, definitely not delicious. But most of all, he was upset how the name misused the designation of a chemical element which can not be found in apples. Mike found another blatant error in a book where the vitamin C content of an apple was given 21% too high - a clear violation of scientific principles. This must have been a rude "appie" attempt to come closer to the intrinsically high vitamin C content of oranges. Mike also felt bad about a computer company that had even chosen the apple as their corporate logo, totally undeservedly overstating the importance of this fruit.

As further proof for his cause, Mike decided to perform experiments, throwing the two types of fruit against a solid wall and against each other. While the apples were mostly getting smashed, the oranges often stayed intact because of their stronger shell. Mike, of course, maintained fair conditions by always using the same hand to throw them. He documented his experiments with photos he took with a digital camera, always at the exact moment of the impact. Based on this evidence, Mike spent many days and nights to ascertain the superiority of oranges with strength calculations.

One day, Mike proudly presented the results on his new website he christened "I Want You to Eat Oranges". He polemically demanded that all apple farms be burnt down to the ground, all apple farmers be executed and all apple eaters be re-educated to love oranges. Of course, he did not mean that seriously but it was only a style of presentation for his findings which were, as he frequently reaffirmed on the site, firmly based on scientific principles. He admitted that no fruit could possibly be perfect, but regarding oranges, bananas, raspberries and even pears, it was safe to say that apples just tasted the worst. As opposed to what people were always claiming about "healthful apples", Mike pointed out that there were often worms in them, which he believed was previously unknown evidence why "appies" would have to reconsider their opinion. Apples are dirty, they are cheap, there are far too many of them. Everyone is just talking about apples as if there was nothing better to eat. Moreover, they are grown in countries with communist and racist suppression. And apple trees are downright ugly anyway.

The apple is evil. Those who defend this abominable fruit must be blind morons, just like the Creationists in Kansas who dare to claim, with their laughable pseudoscientific arguments, that Adam and Eve once ate from, you guess it, an apple.

Special thanks to Bernd Schneider for permission to reprint this lovely post from The Subspace Comms Network, and to the fellow who made the following in reference to it: 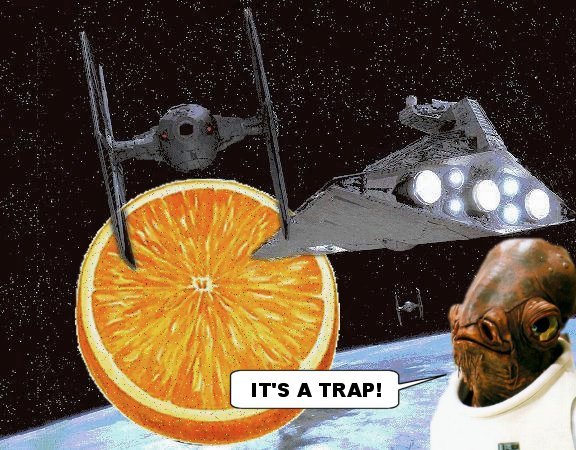 Back to STvSW Fun Pages