A short listing of tricorder capabilities appears below.  Suffice it to say that be it meteorological, biological, chemical, geological, astronomical, quantum-physical, or technobabble-al, the tricorder has probably been used to scan it. 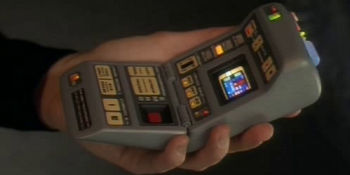 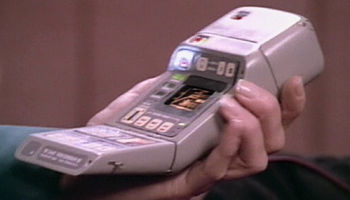 Another tricorder version first seen in 2370 featured a data screen which covered the entire upper half of the unit, with the four buttons normally to the left of the screen absent ("Blood Oath"[DS9-2]).  Further, this model appeared to have a cover for the scan head's blinky lights, as they are absent in the shot below but occasionally appeared in other scenes.  This may be represent some sort of ruggedized or covert-operations tricorder unit. It is unclear how even the larger-screen version managed to perfom as well as we've seen them perform . . . one would expect that in most scenarios, the eye strain of trying to read those little bitty screens, smaller than the smallest PDA,  would cause blindness.   The only time we hear of an alternate information display mode is "The Chase"[TNG6], which mentions a holographic emitter diode.   In any case, however, the units seem to be more than capable of giving the user the necessary data in a timely manner. 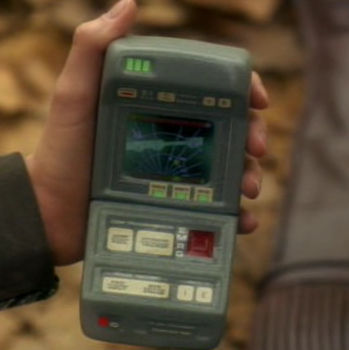 The preferred model after 2371 was simply the standard tricorder rendered slimmer and sleeker, featuring a screen of almost twice the area and an angled scan head.   This model was used in both the standard and medical tricorder roles, though the latter featured a small removable scan unit on the underside of the head section. (This version of tricorder appeared in the latter seasons of DS9 and the first three TNG films.  Interestingly, though, Voyager started out with the earlier small-screen tricorders and, after the first season, obtained the new ones.  Something similar happened with the phasers.  I suppose we can assume that, in both cases, Voyager had access to a "beta testing" version of the new design and implemented it, or that the patterns were available for the new design already and were scheduled for deployment at a certain time, or after a certain training period, or what-have-you.  Of course, the reality is that it was just a flub.) 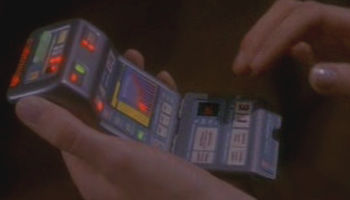 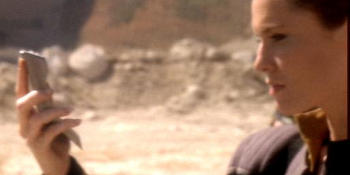 In the late 2370's, a new tricorder appeared alongside the earlier model.   This new type almost entirely dispensed with the somewhat anachronistic button-and-screen approach employed on the earlier tricorders, and appears to be far less bulky than the earlier models.  A few buttons remain for basic commands, but the primary interface is a large touch-screen not unlike a modern PDA.  The unit features a small flip-up scan head, and the same unit serves in the standard and medical roles. 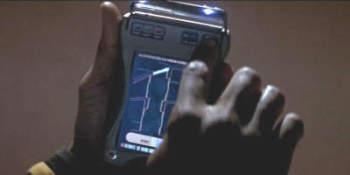 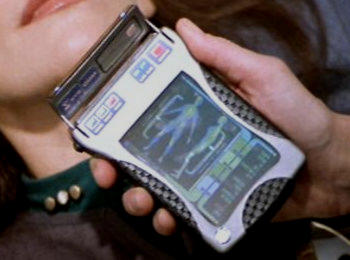 One couldn't hope to fully catalog all of the capabilities of tricorders.  Here is a brief list . . . I'll add more if I find anything interesting.

Despite all of the above points, tricorders are not omnipotent.  We've seen them fooled, spoofed, and incapable of getting firm readings on multiple occasions, generally due to some sort of technobabble interference field.  The Gorn even locked on to Spock's tricorder scans in "Arena"[TOS], producing a feedback that resulted in the tricorder's destruction.   In "The Siege of AR-558"[DS9-7], we learn that on the front lines of a battlefield both sides sometimes use their scanning devices to jam the sensors of the other side, meaning that tricorders were rendered virtually useless.

Nevertheless, they constitute extraordinary tools, and a vast improvement over the equipment of modern forces.

Just as a side note for kicks, we've also seen some pretty spiffy binoculars.   The ones below come from Star Trek V, and though they appear to be quite nifty they're also awful for nighttime operations.  That red glow is a dead giveaway of one's position, and an unforgivable design flaw.   (For example, the United States military has spent a great deal of money on techniques to lessen the reflective properties of the lenses in their binoculars and scopes.  I doubt they'll be adding lights to them anytime soon.) 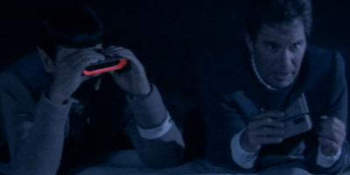 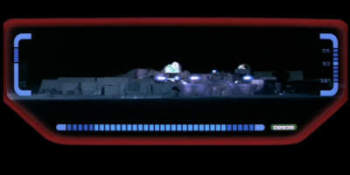 Then again, the various night-vision devices of both Starfleet and the alien hunters of "Rogue Planet"[ENT1] were similarly goofy-glowy, so at least there is some continuity in that regard (even if it is bad). 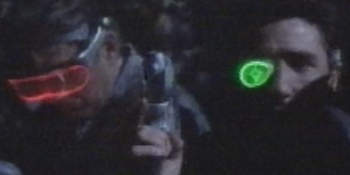 Some more normal binoculars from over a hundred years prior were seen in "The Shipment"[ENT3].   Below, we see them (with brightness/contrast enhancement) in use by Archer, with a side view for scale.

Though looking normal from the outside, the view as seen in the episode was strangely digitized in a manner akin to the view out of the night-vision monocle.  This suggests that the binoculars might be capable of things other than basic zooming.

Fortunately, the red glow of the ST5 binoculars didn't last.   Below, we see Starfleet binoculars employed in "The Outcast"[TNG5].  They are similar in design to the binoculars of several decades prior, but slimmer and without the red outer glow. 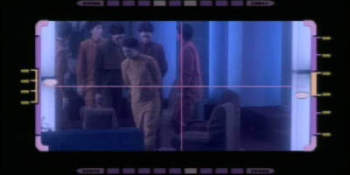 The devices shrunk quite a bit over the next seven years, resulting in these small binoculars employed by Picard in Insurrection. 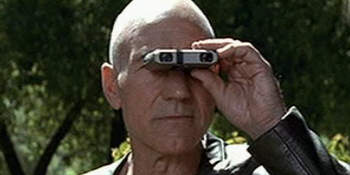 (The older units were still employed in the same year, however, and are seen in use on AR-558.)

One obvious question would be why binoculars would be used at all.  A tricorder should be able to readily provide a zoomed-in view of anything, providing more data than a visual scan as it does so.   But, whereas a tricorder can put out trackable signals, be jammed, et cetera, binoculars are a very simple passive sensor device.

Back to Ground Combat