We've all seen it . . . the Jedi ability to deflect blaster bolts by use of the lightsabre. It is, arguably, the most useful thing a lightsabre (properly wielded, of course) can do.

The question of whether a lightsabre could deflect the normal beam of a phaser, though an interesting question, shall not be addressed here. However, there's one element to consider: 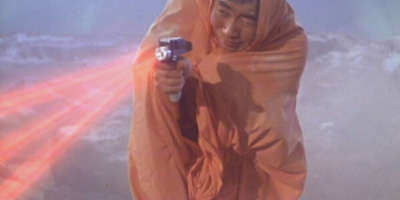 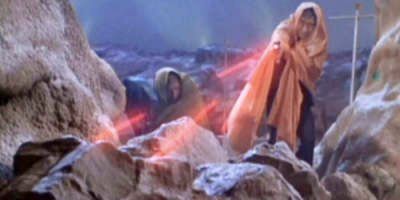 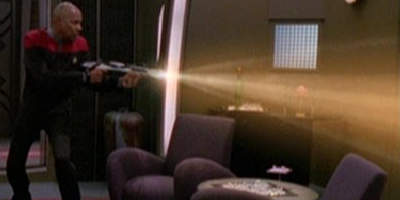 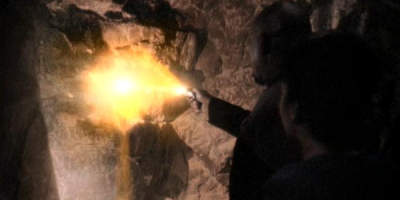 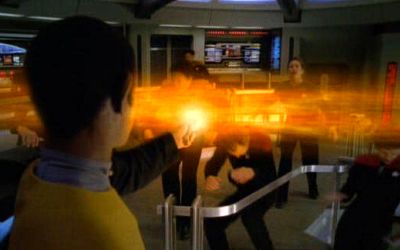 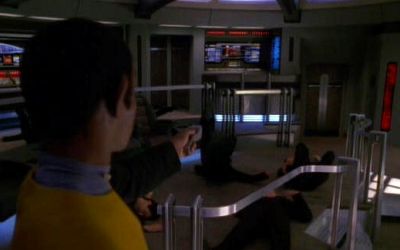 Phasers are capable of putting out shots somewhat wider that a lightsabre, to say the least, in multi-short-burst (or 'triple-beam'), conical, and lateral spread (a.k.a. Clear the Bridge) form.  These would almost certainly need to be avoided by a practiced Force-user, just as Mace Windu had to leap away from Jango Fett's flamethrower in AoTC (albeit with the loss of his burned outer garment).

Though there should logically be a drop-off in effectiveness at longer ranges, a limited spread (a la Sisko above) should allow for decent range and power versus a Sith opponent.

1.  Force-users could resist the stun setting.

There is no evidence in support of that contention.  We do know, however, that people with high midichlorian counts don't have a natural resistance to being blaster-stunned . . . note Leia (twin of Luke) getting dropped by Stormtroopers in ANH.  The best evidence in support of the resistance idea would be that Qui-Gon somehow managed to avoid suffering severe burns on his hand when cutting through a Trade Federation ship's door in TPM, though we do not learn how.  However, that is not the same as being hit by a stun beam or any other weapon, and we know from AoTC that Force-users are not impervious to weapons fire that gets past the lightsabre.

Han's shots against Vader were not absorbed, as the reflected hits to the wall and the scorch-marks thereon demonstrate.  Besides reason, we also have the report of the canon novelization:

In that instant, he cleared his blaster from its holster, aimed it directly at the figure in black, and began to pump laser bolts Vader's way.

But the man who may have been the fastest draw in the galaxy was not fast enough to surprise Vader. Before those bolts zipped halfway across the table, the Dark Lord had lifted a gauntlet-protected hand and effortlessly deflected them so they exploded against the wall in a harmless spray of flying white shards.
(TESB, ch. 11)

Thus, the only clear example of energy absorption we've seen in Star Wars is when Yoda absorbed Dooku's "Force lightning" in Attack of the Clones, and Palpatine's in Revenge of the Sith.  However, suggesting that Force-users can absorb any energy because they can absorb Force energy is absurd.

2.  There is no evidence of a wide-beam kill setting.

1. "Frame of Mind"[TNG6] . . . Riker sets his phaser to maximum (setting 16), on a wide field, and comments that it should destroy half the building. (Yes, this was while Riker was mind-tripping, but Troi makes it clear that his mind was latching on to real-life elements to keep him sane during the neuro-somatic procedure.  In short, there is no reason to assume that Riker's understanding of phasers was affected.)

2.  "The Enemy Within"[TOS1] . . . Sulu's heating of the rocks to glowing with multiple short triple-beam bursts would, based on the heating effect, be more than sufficient to kill someone.

3.  "Homefront"[DS9-4] . . . phasers on a widebeam setting could have their power setting altered.  (This is seen with the small wall-mount units in tests with Odo, which were in the low threes.  The final setting chosen was 3.5.)

3a.  "The Vengeance Factor"[TNG3] . . . setting 7 is known to be able to produce temperatures in excess of 2,300 degrees.   Even if we assume that, for some odd reason, Data suddenly decided to use Fahrenheit instead of Celsius, that would be sufficient to melt most rock.

4.  "Cathexis"[VOY1] . . . Later in the episode, after the widebeam stun blast I show a picture of above, Tuvok (inhabited by some alien mind during the entire episode) threatens to fire on the bridge crew once again, this time saying:  "this phaser is on wide-beam dispersal and set to kill".  No one contradicted him, and the alien clearly knew everything Tuvok knew, from ship operations to the nerve pinch.

Thus, there is plenty of evidence in favor of wide-beam kill settings, both via direct statement and logical inference.

Thanks to Graham Kennedy for the "The Enemy Within"[TOS] cap.  Thanks to "Tulkas" for noting the flamethrower analogy, and to "NDR" for pointing out the wide-beam kill setting from "Cathexis".