The Basics of the Superlaser

In AoTC, we get a look at the internal mechanics of the prime weapon of the Death Star. 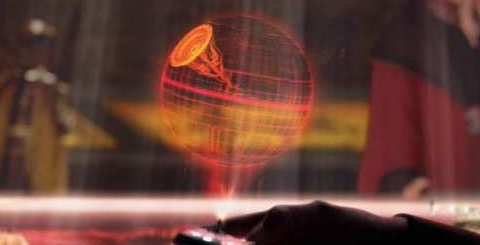 The weapon appears to be roughly conical in shape, extending from the ~36.25 kilometer dish down to the reactor itself, 60 kilometers beneath the surface (see the Death Star scaling page).  It is, to say the least, frickin' enormous.  The superlaser weapon of the second Death Star is presumably scaled up in keeping with the diameter and reactor size scale-up, making it even more frickin' enormous.

The act of firing the superlaser appears to be a well-orchestrated operation involving numerous personnel.  When the order is given to fire on Alderaan in ANH, we get to see two of the involved Death Star crewmen in a most interesting chamber:

The round channel at the end of the chamber is no more than about 10 meters wide, and is one of the areas through which one of the superlaser tributaries passes.

Above, we see some sort of small orange beam, with a cylindrical green glowing area around it.  We get no further explanation of this in the lesser canon.   The small orange beam would seem to be some sort of guide beam . . . the cylindrical glow could possibly be a forcefield of some kind.    In any case, it would seem to constitute the outermost bounds of the first, very large pulse of the superlaser tributary, which passes moments later.

As you can see above, the second pulse is about half that diameter.  Note also that there is a peculiar extra luminosity which appears to emerge from the upper and lower tubes with the white glowing areas.  The luminosity consists of green and orange lines.  These would not appear to be cylindrical (i.e. another layer of the cylindrical green glow surrounding the guide beam in the first image), but instead appear to be lines perpendicular to the beam.   They would seem to indicate that the cylindrical green glow (and perhaps the original guide beam) is being generated via those glowing tubes.

If the above beam is only about five meters wide, as judged by the surrounding channel, then the tributary above cannot be one of the ones seen emerging from the Death Star moments later.

Judging by the 700 meter width of the trench, the pulses moving along the superlaser tributary beams must be on the order of 500 meters in size, at least.  The tributary beams themselves are significantly smaller, but cannot reasonably be less than about 25 meters in size, at minimum.  In addition, there is no indication of the large first pulse along the beam that we saw in the channel present in the exterior tributaries.  Therefore, it is likely that the beam we see travelling down the channel probably converged with additional beams from other sub-channels before erupting from the surface as one of the tributaries above.  It is unclear whether these various channels and sub-channels are part of the conical portion of the superlaser shown in the AoTC hologram, or whether these structures extend radially around that large equipment.  In any case, the superlaser seems to involve multi-stage beam convergence.

The idea of a laser engaging in beam convergence (without benefit of mirrors and prisms) is an odd one, which led Curtis Saxton to quite rightly point out:

When the eight tributary beams meet at the weapon's focal point they do not pass through each other as genuine light beams would. Instead they come to a halt and energy apparently builds at that point until a critical moment when the final outbound beam is spontaneously released. Whatever force is involved in the "superlaser", it cannot be mere electromagnetism because non-disruptive superposition of beams is ruled out by the focal point behavior.

As seen in the images above, the beams do not emerge all at once, but instead do so in a somewhat haphazard manner.  The earliest beams simply stop at a certain point where they'll all be meeting, and seem to begin to form a green, gaseous-looking region from which the final superlaser beam is emitted.  While it is theoretically possible to bend a laser beam travelling through a plasma by use of magnetic fields (which could serve to explain the gassy region and the convergence), there is still the fact that the beams simply stopped at the convergence point.  That is not possible with a laser.  As such, there is simply no way for the superlaser to be a laser beam, any more than any of the other lasers of Star Wars could be lasers in the proper sense.

It is also worth noting that during the final beam generation, there are a number of discontinuities in the beam.  There are several instances where pulses are missing or occur with different frequency, and there are even points where the tributary beam seems to have been briefly interrupted, or is at least so weakened as to be below the visual threshhold from the viewer's range.   These oddities seemed to have no effect on the aim of the beam, suggesting that, even if the DS1 beam could have been aimed, it would not be by such a method.

Last but not least, note the green-hued radial glow appearing with each tributary beam, extending in toward the center of the dish.  That is not consistent with a laser, either, and is also an unexplained peculiarity.

The second Death Star's beam, which could be aimed by several degrees to target ships, was somewhat different in generation.  There was a sub-tributary channel of the same dimensions, and it is likely there were additional stages of convergence as a result.  The tributary beams appeared thicker than their DS1 counterparts, relative to the size of the dish, and there were only a few pulses before beam generation.   The biggest difference, however, was the central beam, which upon striking the point of convergence seemed to produce the main superlaser beam.  There was also no radial glow . . . instead, the dish glowed with a green hue, but only in the already-sunlit regions.

In the ANH novelization, we're told that the first Death Star fired on Alderaan from within antigrav range, which is said to be about six planetary diameters.  Assuming Alderaan to be Earth-like means that the superlaser was fired at a range of about 77,000 kilometers. The final superlaser beam takes 38 frames to reach Alderaan, which at 24 frames per second and with the stated distance of 77,000 kilometers equals a speed of 48,631.6 kilometers per second, or about 0.162 lightspeed.

The second Death Star's beams were not so fast when fired, but there is an instance (against the so-called "Rebel Wingless") when the beam was being fired and completely terminated in the space of a single frame.  This would seem to indicate a variability in the speed of the beam, though at the short range of the observed DS2 shots there is no indication of greater speed than in the Alderaan shot.

(The speed issue, plus what's been mentioned before, plus the obvious fact that one cannot see a laser beam from the side in vacuum, all refute any notions that the superlaser is just a really big laser.  It's too slow, too weird, and too visible.)

Back to the Death Star Research Project