This page regards a very odd, yet classic tale.   It starts out a simple one . . . in The Empire Strikes Back, a Star Destroyer escorting Vader's Executor quite obviously loses its bridge tower due to asteroid impact.   The canon script and novel suggest that the entire ship exploded, besides.   However, remarkably, the opposition insists that the ship was neither destroyed, nor even damaged appreciably.   Take a look at the following, and draw your own conclusions:

First, let's take a look at a few general frames from that scene from the Cinemax HD version:

Following the above, we end up on the Executor, as Vader (via holoconference) addresses a few of his captains regarding the Falcon chase.  One of these captains is standing calmly, and then raises his hands as if he's about to be hit by something, and the image begins to distort and fade away.

The notion that an ISD could be felled by a 'mere' hurtling mass of asteroidal material is anathema to some, and thus a variety of counterarguments have been presented.

A.  Stills of Glow and Shadow

As visible pre-impact, the more distant Super Star Destroyer Executor is emitting an unusual orange glow around her ventral stern, presumably mere refraction of her engine glow from within the engine bells.  We see the same effect soon thereafter as the Executor emerges from the asteroid belt, as seen in the cropped shot below:

Assorted claims have been made regarding this glow region in the aftermath frames.  For instance, if you draw lines near it you can make shapes that are similar to the shape of the Star Destroyer's neck area, as with these: 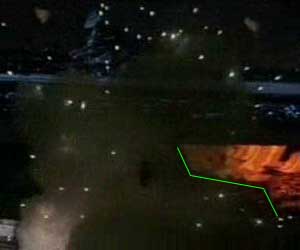 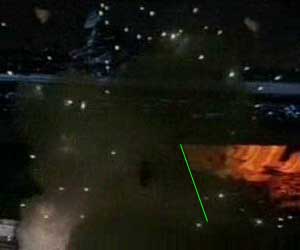 However, the flaw in such maneuvers is that the tower could not have been at either location.  In the below, I have overlaid the Star Destroyer from the impact frame (offset upward a bit for ease of reference, and also leaving a little bit of the glow from behind the neck to make the neck more apparent) onto the final frame, lining them up based on the remaining Star Destroyer hull details:

They don't exist in the non-overlaid frame: 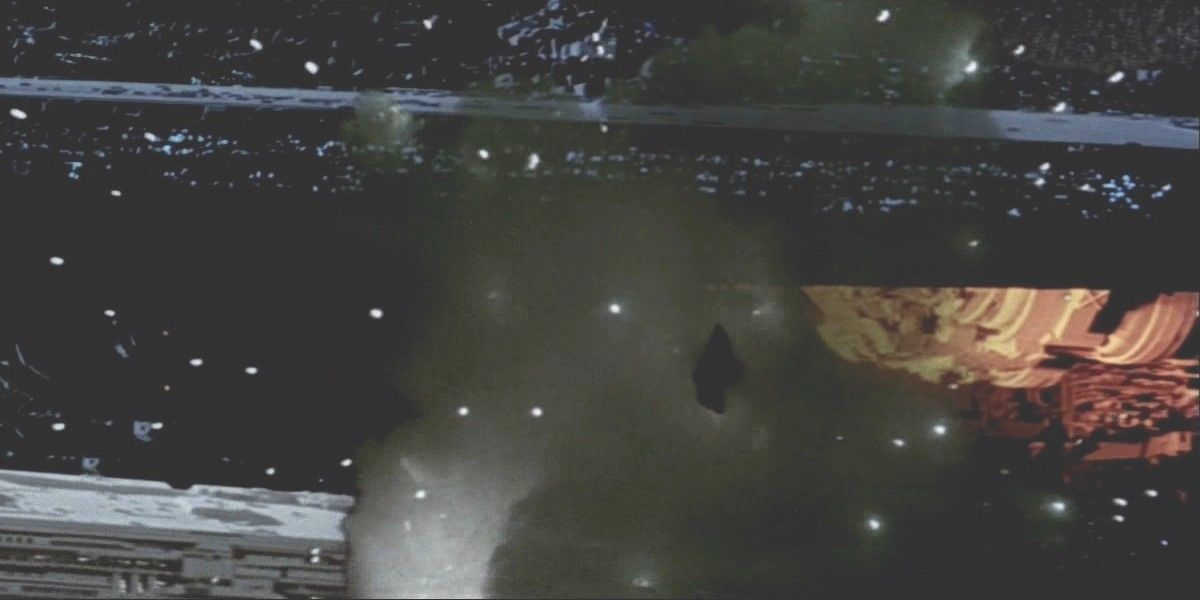 Up where those two sparks are, side-by-side in front of the Executor's lateral trench area, we ought to be seeing the portside globe of the ISD's bridge tower.  We do not.

To the left of the dust cloud, we ought to be seeing the starboard half of the ISD's bridge tower.  We do not.

(Some have claimed that it is merely obscured by dust, but that is absurd . . . the main hull just to the left of the dustcloud is clearly visible, as are the hull and even the window lights of the Executor above!)

For the sake of fairness, it's worth noting that a slightly-better-than-cursory glance at the scene does reveal something of interest.  If you note the unusual orange glow of the Executor's engines against her own hull in the video, you might catch a glimpse of what looks like a moving shadow . . . basically the same one being claimed in the above.   The problem, of course, is that it is in the wrong place, and thus does not represent an undamaged bridge tower neck.    One could argue that a portion of the neck was not shattered but hung on, dragged behind the ship by some tenuous, warped frame members . . . but there's no way to be sure.

(In reality, this is probably a sloppy hold-out matte . . . a special effects artifact from pre-CGI days . . . left not-cleaned-up because it was obscured by the dust cloud.  Obviously they did clean up the hold-out matte where it was supposed to cover up the Executor trench area.)

There's also the argument that, because the captain is not already dead by the time we cut to the Executor bridge and Vader's holoconference, then the bridge of the destroyed ISD must've survived for some amount of time.

From the perspective of your average movie-goer, the captain's apparent demise was just a rewind of a few seconds.  But, for the purpose of debating (where the films are documentary-style, linear footage), this cannot be.  And so, they claim, his survival for a few more seconds must indicate that the tower was not obliterated.

(Some have suggested the slightly more reasonable position that the tower was destroyed, but that somehow the area around the bridge itself was knocked off but more or less unaffected, with the captain able to transmit and act perfectly normal until the bridge finally started to disintegrate.  However, the notion that the bridge could be knocked off, while still having power, being capable of transmissions, and without even a jostle of the captain makes little sense.  First, the low-speed collision of two ISDs during the Falcon chase involved the crew getting knocked around quite severely . . . the notion that the captain of a ship hit much harder would not get knocked around at all doesn't follow.  Second, the Rebel ion cannon that knocked out an ISD cut the entire ship's power, which suggests that the power systems are not so robust as to be capable of independent operation when the area around the ship has been wiped out.)

Therefore, the captain could not have been on the bridge.

So where was he transmitting from?  There's no way to tell.  Even in AoTC, Obi-Wan's little Jedi fighter was sufficient to have a holographic communication system aboard, so it isn't like the things have to be monstrously huge.  We even saw a small walking unit in TPM.   He could've been in his quarters, or in the engineering section, or really just about anywhere that had a sending unit (and probably a holoprojector, too, but not necessarily).

And so, we see the flaws in that argument . . . a peculiar belief that the bridge tower simply became invisible but still survived, mixed with an unsupportable assumption regarding the captain's location.

Some have argued that we should've expected to see a great deal more debris from the tower.  Thus, the claim goes, the tower was not destroyed.

Though I agree that more debris would've made the scene look more realistic, the leap of logic that the tower was not destroyed is unsupportable.   The bridge tower is gone.  If it was not destroyed, then where did it magically run off to?  Even if we generously presumed that the neck snapped and the tower survived intact, tumbling off into space, it would still have to be at least partially visible behind the dust cloud by the end of the scene, even if it tumbled off at the best possible angle and trajectory.

In short, this claim is a fair effort, but still makes no sense in the light of what we can see.

(I also enjoy this claim of Mike Wong's for another reason.  The TESB asteroid-shooting scene is another featuring something being destroyed with little to no visible debris.  Wong claims the lack of debris is indicative of vaporization . . . but in this case, he claims the reverse.)

III.  So what did happen?

At barest minimum, the bridge tower of the Star Destroyer was totally annihilated by asteroid impact.

The captain, in some other location aboard the ship, was killed by some secondary effect (a reactor explosion, continuing hull disintegration, or what-have-you).  This indicates that the destruction did not end with the final frame of the external scene.   If the ship's destruction continued for several seconds after the cut to the holoconference scene, then we have firm support for the lesser-canon screenplay and novel, both of which suggest that the entire ship was destroyed (specifically, "exploded") as a result of the asteroid collision.

Therefore, the only logical, canonical conclusion is that the entire ship was destroyed, as the absolute canon of the films is not contrary to this.

Any opponent who continues to claim that the Star Destroyer bridge tower visibly survives must account for the following:

Below, we have a cropped version of the earlier overlay, brightened in keeping with the brightened final frame from II.A  . . .  move your mouse on and off of the image to swap between the overlay and the non-overlay view.  (Confirmed working in IE, Mozilla, Opera) 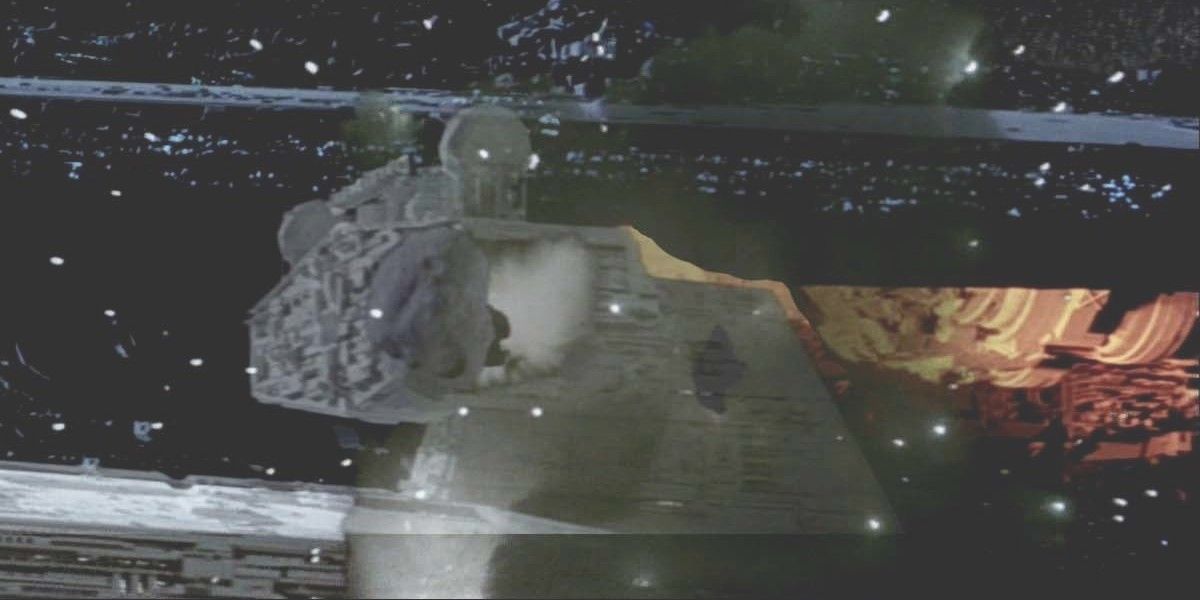 And so that's the challenge . . . explain the missing pieces.

As I have set forth an impossible task, I feel quite comfortable in concluding that there will be no takers.