Just an amusing anecdote from the Trek canon.

In "Lonely Among Us"[TNG1], the Enterprise-D travels to the Beta Renna star system on a diplomatic mission.  As Picard reports in his log, the two races of the system, the Anticans and the Selay, became enemies shortly after both achieved spaceflight.   Both then ended up petitioning for Federation membership, and thus the Enterprise was carrying delegates from both worlds to the sector's neutral conference planet.

Provided one can sit through this achingly slow-paced installment of TNG, one will reach an interrogation scene between Riker and the Antican delegates.  Upon coming aboard, both parties had decided to play a little cat and mouse through the corridors, and the Anticans got caught skulking about the area of the Selay quarters with an object which seems just a bit familiar: 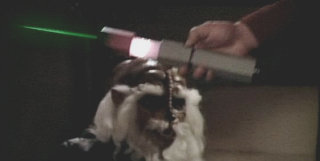 The Antican delegate explains its function (if with a bit of defensiveness):  "These are not weapons, First Officer, they are tools.  We use these to dispatch the animals we consume."

Though in theory it could be nothing more than a small plasma torch (provided we ignore the sharp beam cut-off at the tip, and the lack of apparent heat), the resemblence to something best described as a 'lightknife' is pretty good.  It even extends to the way the device turns off . . . take your finger from the trigger, and the beam shortens back into the shaft. 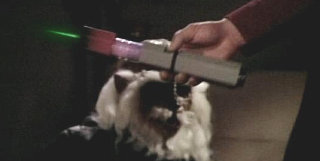 Alas, though Riker was in possession of two of them, we never get to see what happens if two blades touch, or if the blade could be extended further for larger prey.  A pity . . . it would be fun to see Samuel L. Jackson and an Antican going head to head for title of Big Dog.