The Battle of Britain

Re:  "Correcting Misconceptions about “Balance of Terror”"

Anderson here addresses two concerns about Romulan technology demonstrated in "Balance of Terror" [TOS]. They are related only by episode

. . . which may or may not be related to the fact that the title of the page has the episode title in it, which might logically suggest that (gasp!) it's dealing with that episode . . .

, and will be dealt with in two sections. 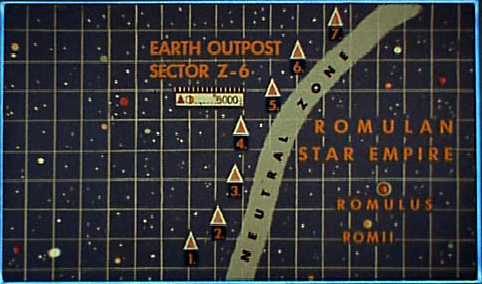 The first of Mr. Anderson's claims is that a map disproves Scotty's statement about the Romulan ship involved in the episode being limited to "simple impulse," as opposed to warp power. Anderson presents a map that shows a group of outposts, and compares the comparative speeds of the Romulan ship and the Enterprise, which is known to be moving at maximum warp. He then concludes that this is proof of a Romulan ship moving faster than light. However, the grounds for this argument are shaky at best.

I was truly stunned as I read this page.  I mean, I've grown quite accustomed to a certain level of silliness from Warsie arguments, but to refer to the comparative speed analysis as "shaky" is absurd.

Most importantly, Scotty never corrected his statement to Captain Kirk that they could engage the Romulans with a reasonable chance of victory. No one ever commented on the matter, following their brief meeting. If the Romulan vessel had actually been forced to move faster than the speed of light to reach the next outpost in line, someone should have commented on the matter, and realized that the Romulans were using warp engines and were not moving at speeds below that of light.

Or, as I pointed out, everyone already knew that the Romulan ship was going FTL, and that therefore Scotty's comment about simple impulse referred to the reactor technology (hence the "our fuel runs low" comments), or some other aspect of their comparatively-limited propulsion technology.

How then, is it possible that Anderson's map is incorrect by that much?

The simple fact of the matter is that the map is a two dimensional representation of space. Space is three-dimensional. If the Enterprise is sufficiently above or below the plane of the outposts, or if the outposts are built on wildly different planes, it is entirely possible that the Enterprise could actually be moving as fast as it is while the slower Romulan ship is moving at a very slow speed.

Ossus also provides the counterpoint to his claim, albeit unwittingly.   If the Earth outposts are built along "wildly different planes", so that, for instance, Outpost Two is a thousand light-years from Outpost Three, which is but a mere four light-years from Outpost Four, then the Romulan ship would have needed to travel much, much further . . . and therefore much faster.  I mean, as long as Ossus can wank himself to produce an argument, so can we.

(This is akin to the Galileo argument I mentioned in the Wong debate.  When Galileo noticed that the moon had mountains, church-men were shocked and appalled . . . according to their beliefs, the moon was a perfect sphere. So, they argued that there was an invisible crystal over the moon, thereby making it spherical. Galileo, in his wit, replied that the invisible crystals were arranged into even taller mountains.)

Moreover, the Romulan weapon is demonstrated as having warp-capabilities, although as will later be demonstrated the weapon cannot track in warp. Thus it would be highly possible for the weapon to be fired by an impulse-driven craft, and yet move at warp for a considerable distance, to impact the outposts.

So, wait . . . Ossus, in his argument against Trek weapons ranges, claimed low tens of kilometers for them due to accuracy concerns.  But now, he argues that the Romulans of over a hundred years before the late TNG era are capable of precision shooting of mile-size asteroids from a hefty part of a light-year away?  I mean, if he accepted that the Romulan plasma weapons could maneuver, it might make a little more sense, but as it stands it is a horrendous contradiction.

And, of course, he doesn't even bother responding to the fact that the same class of ship is seen pursuing the warping Enterprise in "The Deadly Years"[TOS], or that the Enterprise series shows your average glowy warp nacelles on the Romulan ships of a century before TOS: 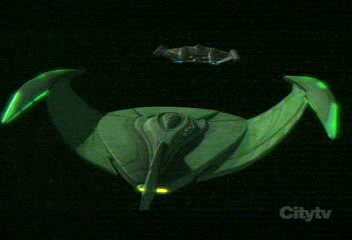 ((It should be noted that Ossus and company missed the most important inaccuracy of mine regarding "Balance of Terror" that I haven't had a chance to fix, and which they could've howled about . . . not that it helps them any.  Over 86 seconds of screentime, the Enterprise moves almost halfway to the outposts.  Whether the ship was going to slow down later or whether there is unseen time, is unclear.  In any event, however, the Romulan ship is still moving at warp, since there isn't enough difference to bring their speed below that of light.  A far superior look at the matter exists here (and thanks to G. Kennedy for having pointed the difference out).))

Mr. Anderson has apparently gotten into a debate with Wayne Poe and some miscellaneous "rabid Warsies" regarding a weapon used by the Romulans in "Balance of Terror." Mr. Anderson contends that the weapon actually changes direction, after accelerating to warp.

Actually, when fired at the Enterprise, the Romulan plasma weapon may or may not have been fired at warp.  While the Enterprise was at reverse warp at the time the weapon is fired (which would suggest a warp shot), I still make no such determination on my page.  It is improper to make it for me . . . and thus, Ossus does so.

He has a series of complicated diagrams depicting his belief that the weapon changed directions independently after it was fired, however there are other ways to interpret the visual evidence without resorting to such unfounded beliefs as weapons changing course. 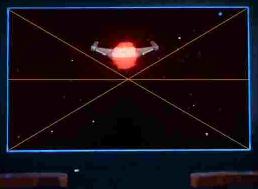 Hmm, gee . . . I don't know, those look too complicated for a mere mortal human to understand.

Unless there's a boom extending downward from the engineering hull with a camera attached, the maximum height differential (i.e. distance from the plane at the top of the bridge compared to the plane at the bottom of the engineering hull) is about 72 meters.   Not only is the Romulan ship a good distance from the Enterprise, but she's also on the order of 130 meters long, judging by apparent deck height and window arrangement.

Thus, in the upper pic of the viewscreen above, even if you were to turn the Romulan ship nose-down, it would still require a full ship-length or so to bring it to the X-marked center of the viewscreen.

The camera position argument failed before, and it still fails.

Alternatively, the camera's orientation may not be depicting what is going on directly ahead of the Enterprise

Wrong.  We see the stars on the viewscreen as the ship travels at warp pursuing the Romulan ship, and we also see them when she reverses engines.  In both cases, the focal point is the center of the viewscreen.

, or the Enterprise travels on a warp plane that is slightly different from the generally understood path of "straight ahead." The latter, strange assertion is actually supported by canonical film evidence. The opening credits of TOS do show that the Enterprise can move in a direction somewhat more vertical than the alignment of its stardrive section.

A stupid argument.  Even if the Enterprise were traveling at warp with her nose down, then when the engines were reversed she would either (A) begin reversing with her tail up or (B) her flight direction would become planar, in keeping with the plane of the ship.   In either case, the course change of the Romulan weapon would still exist.

Finally, an analysis of the attack on the first station, as shown on the screen of the Enterprise, reveals that the Romulan plasma weapon has a slight "wobble," which could easily explain a change in course, even without a deliberate course-change. This is shown, to some extent, by the screen-caps on the link Anderson provides.

A pitifully stupid lie.  As you can see quite clearly on the vidcap provided above (in which the Outpost Four shot elements of the Romulan ship and weapon are re-used when the Romulan ship is visible), the Romulan weapon's edges are not static.  It acts somewhat like a floating "bubble" of water in zero-g.

First, it travels downward toward the ship.   Then, as the ship is reversing engines, it is still headed toward the ship, but from dead center of the viewscreen, which corresponds to the exact direction the Enterprise is heading away from (i.e. the focal point of the stars of the viewscreen).  And yet, when the Romulan ship was visible, the exact direction the Enterprise headed away from was below the Romulan ship, and below the plasma weapon.

Or, to employ another "complicated diagram":

[Editor's note: just when I think RSA can't sink any lower, he goes and tries something like this.

The ship is slightly above the axis on the viewscreen, therefore it must be approaching from a sharp angle? I like his cute picture. Does it occur to him that the following picture can just as easily explain the small Y-axis offset?

As long as the ship appears to be slightly above the view-axis of the camera, it satisfies the picture.

Aww, look . . . I guess my "complicated diagrams" were too much for Wong, too.

1.  Why did he straighten out the Romulan ship?  You can easily see in the viewscreen shot that the ship is tilted downward, no matter where the Enterprise's camera is.

2.  No matter where Wong and Ossus think the camera for the viewscreen is, it is a fact that the weapon first moved downward, and then chased the ship along her direction of travel.  In other words, even if the camera was at the very bottom of the ship, then it was still at the bottom of the ship when the plasma weapon was giving chase along the direction of travel . . . and thus, we're right back where we started, with the Romulan plasma weapon tracking the Enterprise.

Mind you, it's always possible that it is a homing torpedo (it's not as if we know much about it), but RSA's "proof" for it is just plain goofy]

My "proof" for it is solid as a rock.   It is the Rabid Warsie arguments against it that are utterly and completely laughable, for their stupidity and dishonesty.

Though no more nails in the coffin of Wong's argument are required, one can hardly help but run Wong's arrogant nose in it.   Hence this jewel, offerred up by a feedback respondent:

"As someone who was originally schooled in architecture (and believe me, the need to know 3D perspective was a must - I actually had to take two elevations and a floor plan and generate a 3D perspective view of the building, then given the time of day, generate a light source for mathematically correct shadows, and this was no flat "flashcube" building to make it easy!) - anywho, what I was trying to say, it is my EXPERT opinion that the angle of the warbird in relation to the Enterprise is EXACTLY how you described it."

"Because of that, that plasma weapon of theirs, HAD to track and CHANGE course in order chase down the Enterprise - who was running full warp in reverse . . . "

Back to The Battle of Britain
Back to STvSW