What follows is intended as a comprehensive data set regarding the reactor technology of the Death Stars.

Our first viewing (as an audience) of the reactor for first Death Star appears above.  A larger version of the image gives a radius for DS1 of approximately 384 pixels, with the reactor assembly measuring approximately 28 pixels.  (The first Death Star measured 120 kilometers in diameter.   The second, if completed, would've been a sphere 160 kilometers in diameter.   (More information can be found here.))   Thus, 120km/384px = 0.3125 (or 5/16) km/px, so the 28 pixel reactor would measure 8.75 kilometers in size, according to the image above.

However, there were several graphical inaccuracies in the Rebel briefing graphic, not the least of which was that the superlaser dish was shown as being on the equator of the Death Star, interrupting the equatorial trench.  The correctness of any reactor scaling based on that scene is therefore somewhat suspect.

We get a more correct view of the first Death Star in AoTC, in the form of holographic plans. 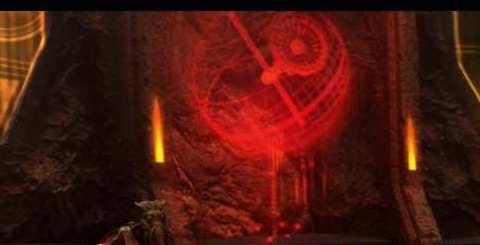 In this image, the Death Star is 120 pixels wide, giving a rather fortuitous 1:1 ratio of pixels to kilometers.  The reactor assembly, shown in the hologram to be shaped roughly like a flat cylinder (i.e. hockey puck), measures 17 pixels from side to side, for a total width of 17 kilometers.  The height of the reactor assembly could possibly fall within the 8-9 kilometer range as referred to above in the ANH shot, which is indeed a side view.  That would leave only the shape of the reactor wrong in the ANH shot, perhaps as a simplification for the fighter pilots.

A very similar holographic image is given in the Rebel briefing in RoTJ, in regards to the second Death Star.

This hologram is much clearer, and allows for a finer determination of sizes.   A larger version of the image gives a measurement of 259 pixels for the DS2 radius (or 518 for diameter), with the total width of the reactor assembly at its maximum being 74 pixels.   (It is interesting to note that the reactor assembly width is almost exactly 1/7th the DS diameter in both cases, in addition to their being shaped the same.)

(Of course, I use the term "reactor assembly" because, as observed in RoTJ, the Falcon and an X-Wing flew inside the hockey puck area and then shot up the reactor.  This rather clearly suggests that the flat cylindrical area is not the actual reactor core, though the various parts could have related functions.  The reactor core was apparently a smaller component hanging down from the upper part of the reactor assembly, with large "power regulators" and other doohickeys surrounding it.   It is not clear if this sort of rig was also present on the DS1, but I have nevertheless used the term "reactor assembly" in regards to that battlestation as well.)

We are told the following in the ANH novelization, at the destruction of the Death Star:

"Space filled temporarily with trillions of microscopic metal fragments, propelled past the retreating ships by the liberated energy of a small artificial sun." (ANH novelization, chapter 12, italics mine)

There has been much debate about this quote, regarding whether or not it refers to the Death Star reactor as being fusion-based.

1.  It cannot refer to energy akin to that which would be liberated by a full-size sun (or even a supernova), because it explicitly refers to the sun in question as being small and artificial.

2.  It is not a simile, since there is no "like" or "as" present.  For example, in "Space Seed"[TOS1], Khan threatens Kirk with the destruction of the Enterprise, and tells him the ship will "flare up like an exploding sun" (italics mine).

3.  Though there's a measure of artistic license employed, the sentence is also not metaphorical, and for a wide variety of reasons.  In short, it is simply too specific, and too precise.   Though one could try to take "sun" as a metaphor for "reactor" (i.e. simply meaning "a power source"), the use of specific and descriptive modifiers (small and artificial) renders moot the attempt to believe that the entire phrase "small artificial sun" is metaphorical.  An artificial sun is a man-made sun.  Further, because we are told that the fragments were propelled by the liberated energy of a small artificial sun, the reader is forced toward a more literal interpretation of the statement, wherein, at the very least, the amount of energy is roughly given.

There was a small artificial sun inside the Death Star, and when control of that power system was lost due to Luke's torpedo, all the energy was liberated.  The sentence would make no sense besides referring to a fusion power system.   I could, for example, try to make the phrase refer to a candle.   It is small, it is artificial, and is sun-like inasmuch as warmth and light are concerned.  However, it is not a small artificial sun, and it is already liberating all of its energy simply by the process of combustion, whereas the Death Star's reactor evidently required containment.  I could try to make the phrase refer to a light bulb.  (And incidentally, as a Google search for "artificial sun" reveals, that is a trade name for electrical lamps which replicate the solar spectrum.  However, most of the entries refer to fusion.)  However, a light bulb is not a generator . . . it is, at best, a sort of energy converter, taking the electrical and using it to heat a filament, producing luminescence.

In other words, there are several ways in which the author could've expressed "big explosion" metaphorically, and none of those ways were employed.  Such ways could include "the Death Star's supernova", "the Death Star became a sun", "flared up into an exploding sun", or similar phrasings.  Instead, Foster wrote . . . and Lucas took credit for . . . a sentence which specifically refers to the energy of a small and artificial sun.

For further example, let's use the oft-employed example metaphor from Shakespeare:  "All the world's a stage."   Obviously, it cannot be taken literally.   For starters, the world is not flat, as stages generally are (whether named "Globe" or not).  On the other hand, if Shakespeare were to have said that we are all standing upon a spherical stage of almost 13,000km diameter, held to it by a force of 1g . . . well, we could still try to take "stage" in the same manner in which he originally used it, but it would be best understood as "surface" . . . and we could make estimates about Earth from that.

4.  Last but not least, we cannot take "sun" to refer to anything other than a big ball of fusion, like our own.  In the past, some have tried to modify the definition of sun so that anything from a neutron star to a white dwarf star could fit the bill, so that we would have no more information about the Death Star's reactor than when we started.   Such shell games with the words "sun" and "star" are improper, as are attempts to redefine "sun".   All suns are stars; not all stars are suns.

Now, although I find the conclusion that the Death Star reactor was fusion-based to be incontrovertible, it is still  possible that somehow it might not be.

Even if we assume it isn't fusion, however, we're still stuck with a simple fact.  The Death Star was powered by something which either (A) operates via fusion or (B) operates via some technology that produces a similar energy  output to fusion, as a result of the "liberated energy" statement.

(Vs. Debaters such as Mike Blackburn (a.k.a. "Ossus") have conceded the point.  As he so graciously stated his preferred choice of B:  "The ANH Novel reference which DarkStar accredits such power is actually inconclusive to say the least. It is clearly referring to the amount of energy released, as opposed to the manner in which it is produced" (italics mine).)

Unfortunately, even with the knowledge regarding the technology above, it is not possible to get precise estimates of the energy produced by the Death Star's reactors over any timeframe.  One could try to estimate based on the efficiency of fusion and the size of the reactors, but helpful details such as fuel consumption rate would be lacking.

Some have tried to estimate the Death Star's reactor power by assuming that the Death Star's reactor supplied all of the energy for the Alderaan blast.  However, given that our huge natural sun 'only' manages to put out about 3.85E26 watts, and given that the Alderaan event would've required something on the order of 1E38 joules, then we are faced with a contradiction.   A small artificial sun, even if it were capable (at only 17 kilometers in maximum width) of putting out the same energy as our huge natural one (which is well over a million kilometers in width), would still require approximately 259.7 billion seconds to generate that much energy, given the values above.   That's over 8,200 years.  Since we have no indication that ANH took place over the course of 80 centuries, then we are faced with two possibilities.

But that's a discussion for another part of the site.

1.  The Opening Crawl of A New Hope

Before we get to see the Death Star for the first time in ANH, we are told about it:

"[...] the Empire's ultimate weapon, the DEATH STAR, an armored space station with enough power to destroy an entire planet."

Some claim this means that the Death Star had the firepower to destroy a planet.  Note well the absence of the word "fire" immediately in front of "power".  It is a common mistake to assume that the opening crawl tells us about the firepower of the Death Star, when in fact it says no such thing.  The meaning of a word when used . . . the correct denotation or connotation to think of when a word is employed in a sentence . . . is based on the context.  In the context of the opening crawl, the most logical meaning is "capability".  For instance, one man has the power to kill another.  Does this imply that he has some magic organ hidden away near the appendix which can direct sufficient amounts of electromagnetic energy toward another person to kill him?   Of course not.  It implies ability.

Such usage is also seen in Vader's comment: "The ability to destroy a planet is insignificant next to the power of the Force."   If we ignore the context, we could take that to imply that a Force-user can fling planet-killing firepower from his fingertips, which would of course be absurd.

(Another example the usage of "enough power" appears in Star Trek:

Picard:  "Guinan, it is very important that you tell me everything that you know.  We think that Soran has developed a weapon . . . a terrible weapon.  One that might even give him enough power to destroy an entire . . . "
Guinan:  "Soran doesn't care about weapons or power.  He just cares about getting back to the Nexus."
- Star Trek: Generations (emphasis mine)

Soran's trilithium weapon that had enough power to destroy an entire solar system did not, itself, have the firepower to do so.  It caused a freakish reaction that halted nuclear fusion in the system's star, resulting in a supernova.  When used on the Veridian sun, this also had the effect of blowing apart that system's third planet . . . however, no one has argued that Soran's little missile was capable of planet-killing firepower.)

Back to the Death Star Research Project