What follows below is the version of the page as it existed on January 6, 2003.  I have created these back-ups for the sake of historical accuracy, since my site and its pages will continue to evolve long after StarDestroyer.Net's attempted "attack on [my] credibility" is forgotten.

This page is more of a placeholder for a future analysis of hand weapons, but I wanted to go ahead and post the following pic sequence from RoTJ

Impressive pyrotechnics . . . limited damage. I'd rather use bullets, thanks.


Update:  A quote from the novelization of ANH, chapter 1, during the boarding of Leia's vessel:

Red, green and blue bolts ricocheted off polished sections of wall and floor or ripped long gashes in metal surfaces.

"Ricocheted off polished sections of wall"? Wouldn't that suggest that a mirrored surface would be undamaged? Alas, this seems to be overruled by the hits to the mirror-finish royal yacht in TPM . . . but, then, those were not hand blasters. Hmmm.

Update:  Some bright spark decided to try to use a similarly-damaging phaser hit as the Leia arm-shot to try to claim that blasters were equal to phasers.   Over and above the silliness of ignoring the fact that phasers can vaporize people, have settings controlling power and beam width, and so on, the claim is also crap because they ignore the shot fired.

The common form of the attack involves showing this pic: 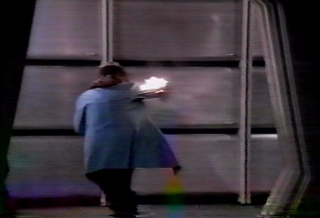 And so phasers, which can vaporize people, can also set someone's arm on fire. Big deal, right?  Well, unscrupulous individuals like to hold up the above example as if it were the maximum a phaser can do. Besides the numerous vaporization examples which can be pointed out, though, there's the simple fact that the beam Lore shot Crusher with was one of the wimpiest seen out of early TNG phasers. 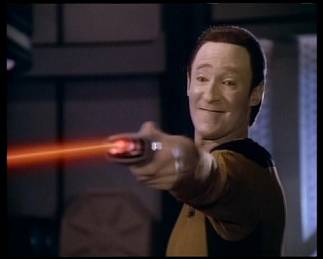 Riker, Data, and Yar firing on the Echo Papa 607("The Arsenal of Freedom"[TNG]) 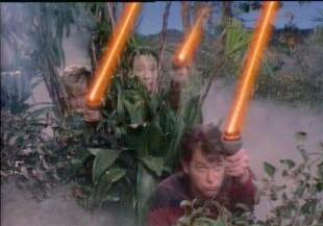 Riker shooting at something with a Type I

It should be noted, also, that my selection of images above was not random.   Besides the girth and intensity of the beams, you'll note that all the scenes involve the phaser firing at a most peculiar angle.  One of the best shots of this phenomenon is below:
Riker firing on Yuta in "The Vengeance Factor"[TNG]
and another similar shot seen from another angle

Warsies are often suggesting that the phasers would be impossible to aim (and thus that blasters are better), in spite of the fact that we see them aim and score hits, unlike Stormtroopers. And yet, here we have off-axis firing ability, either making up for bad aim or being proof that the weapons are as aimable as one likes.  Given the off-axis firing ability, we thus either have a manually-selected user option which allows for firing off at a certain angle, or else we have a highly advanced auto-aiming system in use.

Of course, given the phaser's ability to fire in a widebeam mode, off-axis firing should not be a surprise.

Thanks to L. Kelly for his phaser screenshots, and G. Kennedy for providing the Yuta shot and for suggestions and discussion on the topic.  The scene of Dr. Crusher is (naturally) from Wayne Poe.